The Port Sunlight Village Trust is run by a talented and dedicated group of staff and trustees.

Paul Harris, Chief Executive
Paul joined Port Sunlight Village Trust in March 2015. He is an experienced leader with a proven track record in developing and implementing strategic plans in the public, private and voluntary sectors. He has previously held senior positions at PSS – Health and Social Care Charity, Ashbury Homes, Hornby Homes and CDS Housing Association. Paul possesses excellent business skills and commercial acumen, and his approach is always people-focused. Paul is a board member of Sovini. He lives in Liverpool, has two young children and is a devout Evertonian.

Rachel first worked for the Trust in 2006 to provide maternity cover and re-joined the organisation permanently in 2009. She is a qualified accountant and has previously worked in the public and housing sectors. She is responsible for all areas of finance including budget setting and cash flow forecasting, pay roll, and internal reporting and statutory accounts, as well as office administration and customer service standards. Rachel lives in Rock Ferry and has two young children. She is a keen swimmer and is heavily involved with her local church.

Katherine Lynch, Director of Heritage
Kath has worked for the Trust since 2008. She is responsible for marketing and PR, public programmes, visitor services, building conservation, lifelong learning, resident engagement, fundraising and the historical collection and archive. She previously worked for Tyne & Wear Museums and Archives, the National Maritime Museum Cornwall, and The Tank Museum in Dorset. Her main areas of interest are industrial and military history, communities, and engagement.  She mentors Congleton Museum and Cheshire Military Museum. Kath lives in Liverpool. She is a big sports fan and enjoys running.

Neil Moffatt, Director of Operations
Neil joined the Trust in February 2017. He is responsible for the Operations Directorate, which includes Housing Management, Maintenance, Landscape Management, together with Security and Cleaning. Neil is a corporate member of the Institute of Housing and has held senior positions in Housing Associations in the  North West, North and West Wales. He lives in Cheshire and has four grown up children. In his spare time he helps out in his wife’s small business at local farmers markets.

Rob Young
Rob became Chair of the Board in 2017. He has worked in housing for more than 40 years, at companies across Merseyside, Manchester and north Cheshire. He has spent more than 30 years managing change at a senior and corporate level. Rob is currently Group Chief Executive of a large North West housing provider and is a Fellow of the Chartered Institute of Housing.

John Jones
John became Vice-Chair of the Board in 2017. He is a fully qualified accountant and has held a number of senior executive roles in the Littlewoods Group. Now retired, John also serves on the board of another charity where he is currently Chair of the Finance and Audit Committee, dealing with strategic planning and investments, budgeting, management accounting, treasury matters and audit clearance.

Peter de Figueiredo
Peter is an independent heritage consultant, specialising in architectural history and building conservation. Peter worked as Historic Buildings Inspector with Historic England and as Head of Conservation and Design for Chester City Council. He is author of several books, including ‘Cheshire Country Houses’, ‘Victorian Manchester and Salford’ and ‘Religion and Place: Liverpool’s Historic Places of Worship’.

John Cocker
John is now retired, having worked as a town planner with five different local authorities and was chair of a planning committee for ten years. He also served as a councillor at Wirral Borough Council for 26 years and was Mayor of Wirral in 2001. He is currently an independent director of Plus Dane Housing, and a school governor.

Emma Chaplin
Emma has managed her own museum consultancy business since 2009, and has worked in museums for more than 20 years. She has previously served as a council member of the Association of Independent Museums and member of the Canal and River Trust’s Museums and Attractions Partnership. Her area of expertise is in museum collections management, coupled with a wide understanding of the museums sector. Emma is an active member of the Port Sunlight Wheelers cycling club.

Steve Connolly
Steve has been a qualified Fellow of the Royal Institution of Chartered Surveyors since 1991, and has more than 40 years’ experience in the construction industry. Steve is currently Managing Director of Poole Dick.  Steve is an avid Manchester United fan and his devotion stretches right back to when he bunked off school in 1968 to attend the European Cup Final. 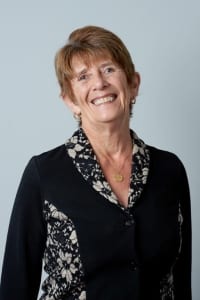 Maggie was appointed Honorary President in 2017. She is a founding Trustee of Port Sunlight Village Trust and was Chair of the Board from 2007 to 2017. Maggie has more than 30 years’ experience working in housing management and development. She was Chief Executive of Family Housing from 1983-2002, and during that time purchased approximately 75 properties in Port Sunlight from Unilever. Maggie has also chaired both Wirral Partnership Homes (now Magenta Living) and Pierhead Housing Association, now Prima Group where she was appointed Chair of the Commercial Board in 2017.